The Ferndale Public Library formally opened in November 1930. Displacing City offices in the former Central School at 130 Nine Mile Rd., just east of Woodward, the new library that first day had some 2,000 volumes, plus 200 loaned by the State Library.1 (The building later housed the Ferndale Board of Education and is now privately owned.) Etta Vivian was the librarian; she had one assistant. Some 1,500 library cards were issued that first year of operation.

The library’s history from these earliest days onward reflects the history of Ferndale in unique ways. Deemed “a city marvelous” in publicity releases of the time, Ferndale’s phenomenal growth in the late 1920s had earned it nationwide media attention as “the fastest-growing city in the U.S.”2 Henry Ford’s offer of $5 a day to workers on his Highland Park assembly line attracted workers nationwide, making Ferndale one of America’s first “bedroom communities.” Census figures in 1930 showed that, in one decade, the city’s population had increased 687.8% to 20,796. Such rapid development was due to the city’s key location on Woodward, Detroit’s continued northward growth, and the region’s installation of a solid infrastructure, including state-of-the-art water/sewerage systems, paving, and even gas mains and electrical systems which allowed Woodward to be the “best-lighted highway in the U.S.”3

Thus, Ferndale by 1930 was ready to support a library, hallmark of an American city’s success. The city’s initial budget for the library: $5,000, which included Etta Vivian’s salary of $1,500 per year, and $2,000 (40 percent) for books. Within a year, the library had 2,217 books; within a decade, 10,581.4 In 1937, a Friends of the Library group was formed, the first of its kind in Michigan. (This group, except for periods during World War II and the 1990s, has operated continuously to support library programs and services.) “One of the finest in this section” was how the library was characterized in a City of Ferndale commemorative booklet in 1944.

City interest in the library reached its all-time high 10 years later, in 1954, when a new library, at 222 E. Nine Mile Rd., was built next to the old library. Bery & Knapp were the architects, and Ralph Ulveling, Director of the Detroit Public Library, was among the prestigious library professionals who served as consultants. Lincoln High School students, Boy Scout, Girl Scout, and Campfire Girl troops, and the general public helped to move the old library’s collection to the new building, a state-of-the-art facility complete with the latest 1950s architecture and Herman Miller furniture.

Michigan Governor G. Mennen Williams was the honored guest at the library’s opening celebration, April 25, 1954. Ferndale residents at the reception that day were immediately impressed by the facility’s spacious reading areas, generous spacing of book stacks, readily accessible reference and circulation areas, many windows, and the large community meeting room, all of which perfectly complemented the distinctive 1950s exterior. The new building quickly became the defining presence of Ferndale’s civic center. Not until 1987, when new ceilings and lighting were installed, were major library renovations required. 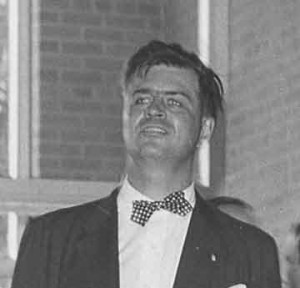 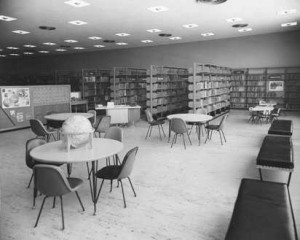 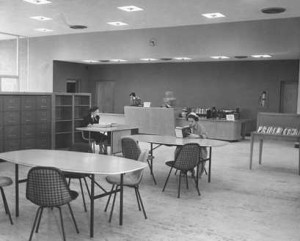 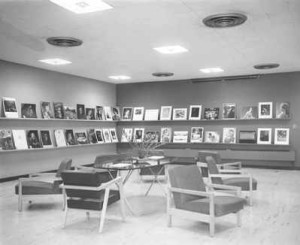 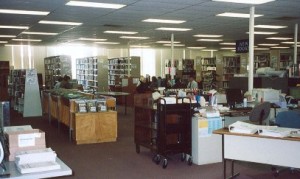 By 2004, a combination of declines in state support for cities and the desire for more public involvement led the City of Ferndale to “spin-off” the library, establishing it as an independent body with an elected board and a one-mill dedicated tax. The newly independent library quickly began a series of public surveys and a strategic planning process which was completed in early 2006 and which the library is now bringing to life. The immediate positive results including interior redesign, an increased budget for materials and plans to lengthen hours of library operation. The community surveys revealed that Ferndale residents had high hopes for the changes and expressed considerable enthusiasm about the possibility of increased library services and activities.

Throughout its existence, the library has been ever focused on providing Ferndale residents with new information access means. In 1974 the Ferndale Public Library became the 24th library in Oakland County to join the new Wayne-Oakland Federated Library system (later expanded to include libraries in other counties and renamed “The Library Network”), allowing library patrons to borrow materials from any member library. And, thanks to a grant from the Gates Foundation, in 2000 the library acquired four computers for public use, which provided patrons with ready access to information world-wide.

Over the years, besides serving as the community’s key information resource, the library has been a center for an array of activities and services. Special programs for children have been a staple since the library’s inception in 1930. In 1975 special Senior Citizen Services were introduced, including a large print book collection, an audiotape resource, and, in 1985, home delivery of materials. Concerts, puppet shows, lectures, book clubs, and political events have been regularly held in the community meeting room. (In 1985, Joan Mondale, wife of Democratic presidential candidate Walter Mondale, appeared at the library on a campaign stop.) For over 25 years, until the early 1990s, the library annually hosted juried art and photography shows sponsored by the Friends of the Library. The library has even hosted a moon rock; one was on display during Lunar Month, May 1975. 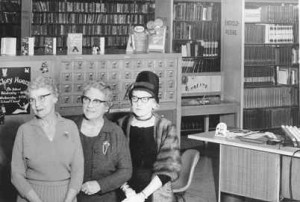 The library, when it moved to its new facilities in 1954, had a card catalogue that had 40 drawers, offering access to the library’s collection by author, subject, and title. By 2005, the card catalogue, key to the library’s now 96,500-item collection, had 185 drawers. Because of its high maintenance costs, space requirements, and limited information capabilities, this catalogue was then replaced by online access. Technology, still ever-changing, had become the elemental means of information retrieval at the library. (A wireless communication system is the latest addition.) But the mission of the Ferndale Public Library and its staff has remained constant through the years: to provide ready information access for the community by the newest technology available–always responsively redefining the role of the public library in “the city marvelous.”

More History of the FADL

“Libraries play an important part in the life of the community; all can use them.”
Head Librarian Daidee Springer, 1980.

1990s-Present
In 1997, the Library Board conducted a citywide survey finding the “prevailing concerns” of patrons were for 1) expanded hours, 2) more space and a larger collection of books, and 3) providing greater access to public computers.

The public’s regard for the library, as it was, had dwindled by the late ‘90s and early 2000s; it was seen as a facility that was small, tired, and out-of-date. Former Library Board President Kevin Deegan-Krause went so far as to argue that it had withered into “terrible” condition, while members of the Downtown Development Authority said that visiting that library building at 222 E. Nine Mile felt like “walking back in time.”

In February 2007, the city council approved the Library Improvement Plan. The expansion plan would modernize the library back into what many felt it could and should be: an anchor of the downtown and a jewel of public space at the center of the city, combining historic preservation and environmentally conscious design. Mary Ann Neal, serving as board president in 2007, inspired voters to support the millage’s vision: “a renovated, welcoming, technologically advanced, environmentally-friendly space for citizens.”

Even as some residents opposed the $3.7 million expansion on the basis of the notably lengthy millage plan (spanning 20 years – increasing taxes $65/year for most homeowners), the Ferndale Citizens for a Better Library instilled support, proclaiming that “a strong, healthy public library is a vital resource that will add to the quality of life.” Before renovations, the initial Library Improvement Plan affirmed it to be a public asset that enriches the entire community, focusing attention on the importance of reading and learning. The Library Task Force that had conducted initial surveys back in 1997 surmised that the library can be “a key measure of the health and vitality of a community,” as well as a fine expression of Ferndale’s collective values and overall identity.

And the citizens responded, voting over 2-to-1 in favor of the millage, once again showing key support for library service. Renovations completed between 2007-2010 updated the library into a 21st-century facility. The building doubled in size, expanding the youth/children’s space and the computer lab, while also extending service hours. The library became a notable green building, using high-efficiency geothermal heating/cooling along with an ecologically-minded green roof outfitted with a rainwater treatment system recycling water for irrigation and restrooms.

Thus, a renewed, expanded library, saving energy with its eco-minded design, has fulfilled and surpassed many expectations throughout the last decade, providing not only the desired increase in physical materials and access to computers and current technology, but also featuring art exhibits, hosting lectures, local authors, and live music, and offering other special events and programming for all ages. In addition to the many services within the library building, patrons are now also able to access several online resources remotely, using their library card to download eBooks and audiobooks, stream movies and music, utilize tutorials and educational databases, and more.

As of 2019, serving a community of just under 20,000, the library had nearly 73,000 items circulating in its collection. There were 36 public computers accessible throughout the library. The current staff totals more than 20 employees, 10 of whom are accredited with Masters in Library and Information Science degrees. The library is open 7 days a week: 10 am-8 pm Monday-Thursday; 10 am-6 pm Friday; and 12-5 pm on Saturday and Sunday. During the recent global pandemic when physical access to the building was not possible, staff worked to ensure patrons could continue to access resources. Curbside service with contactless pickup gave patrons access to physical materials, and online platforms provided the community with the tools needed for work, study, and entertainment. Programs like storytime for kids of all ages, live music, and even art exhibitions, continued to be offered virtually online.

The Ferndale Area District Library prides itself on being a 21st century community center, where the whole community--everyone and anyone--can convene and interact, grow and learn.

Photographs of the time capsule interred in 1976.

Photographs of the time capsule interred in 1993.