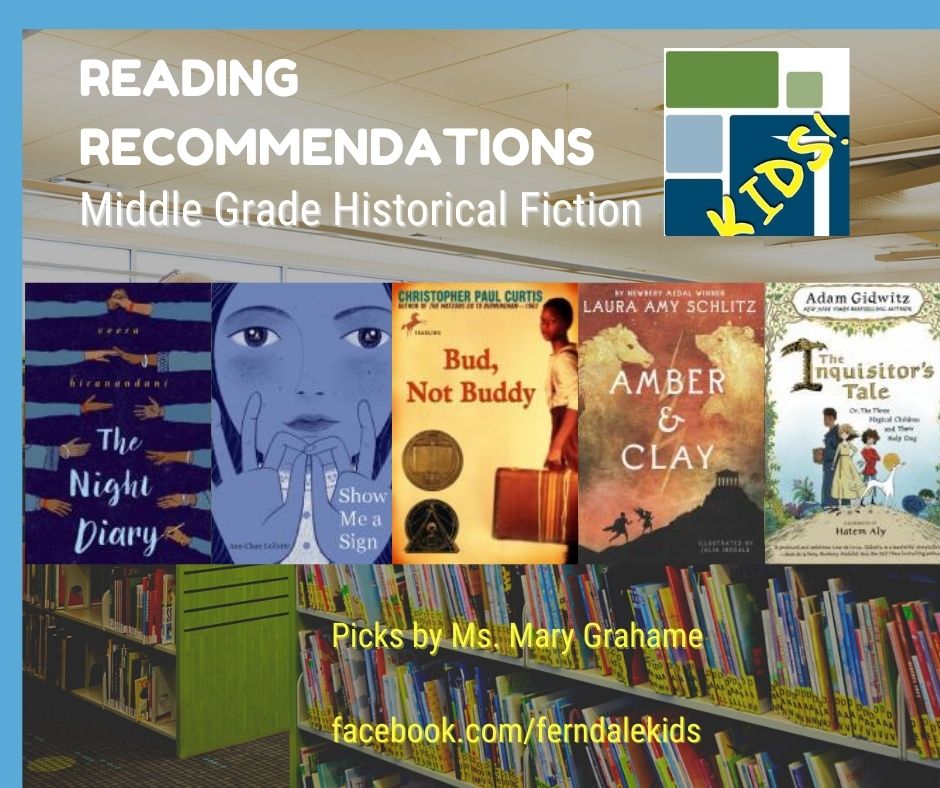 Amber and Clay - Laura Amy Schlitz/Julia Iredale
Journey to ancient Athens in this striking tale of Rhaskos, an enslaved boy who befriends the great philosopher Socrates, and Melisto, a wealthy girl who is sent away from home to serve the goddess Artemis. Although they lead very different lives, Rhaskos and Melisto’s destinies are connected by fate and the will of the gods. Written in verse and in prose, with illustrations, Amber and Clay are refreshing, immersive, and one of the best historical fiction novels published this year.

The Inquisitor’s Tale - Adam Gidwitz/Hakim Aly
This novel set in thirteenth-century France has touches of fantasy in it (including a noteworthy adventure featuring a flatulent dragon) yet is also grounded in the diversity, humor, and artistic expression of the High Middle Ages. Three children–a monk-in-training, a Jewish healer, and a girl who sees visions–become unlikely allies and set out together with the help of a miraculous dog in a race across the country to save books from being burned.

Show Me a Sign - Ann Clare LeZotte
Mary Lambert lives on Martha’s Vineyard in the early nineteenth century and has only ever known a community where deaf and hearing people live and work together. A young scientist arrives on the island, determined to discover the reason so many of its inhabitants are deaf and shows little respect for Mary, her neighbors, and her way of life. After a harrowing kidnapping at the hands of the scientist, Mary must rely on her own bravery and the determination of her loved ones to undertake a daring escape.

Bud, Not Buddy - Christopher Paul Curtis
A modern classic about a runaway boy who goes in search of his father during the Great Depression. Bud Caldwell is ten years old and tired of foster care, so he strikes out on his own to find the rest of his family, guided by band advertisements his mother left him and his own list of “Rules and Things for Having a Funner Life and Make a Better Liar Out of Yourself.” Full of jazz music and Michigan history, local readers will recognize some familiar places!

The Night Diary - Veera Hiradandani
Just after India gains independence from the United Kingdom in 1947, twelve-year-old Nisha receives a diary for her birthday and uses it to write to her mother, who died when Nisha was a baby. Nisha is excited about independence but learns that her hometown will soon be part of a new country, Pakistan and that she and her family will have to leave. She fills her diary with details of a dangerous journey and the honest impressions of a young person trying to make sense of upsetting events when no one will explain things to her. Despite great hardship, she learns love cannot be separated by borders or death, and there is hope for new friendships and new life after suffering.